Results of the 2012 National Championships. 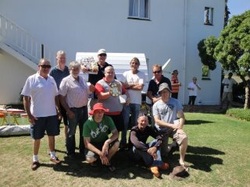 Report by Tersea van Kersen.
Good fun was had by all during the past weekend as the East took on the West at Fairy Knowe Hotel.

The regatta had 22 skippers and their R36’s, 10 from the East and 12 from the West, fighting for the best points of each race to ensure their team had glory in winning the trophy - or was it the case of beer that was the motivation.

The fleet system was used and a total of 15 races (30 heats) was sailed over two days in vastly different weather conditions. Day 1 had all the skippers on their C rigs battling against the uncontrollable gusts. And day 2 brought calmer winds, sometimes not quite enough, and a lot of sunshine.

The results between Day 1 and Day 2 did not change much with the exception of Eddie Fuller from the West jumping from 5th position on day 1 to 2nd overall and Jim Foot from the East climbing from 8th on day 1 to 4th overall.

The Most Improved Trophy was presented by Barry. The trophy is given to the skipper who not only improves the most but also displays good tactical sailing skills, ambition and good boat settings. Jim Foot received the trophy, rightly so.

Anthea pulled out all the stops and showed the boys that they were not going to intimidate her. Putting two A fleet 1st and one 2nd in her pocket she came in 3rd overall.

GRRSC would like to thank all the competitors and all that contributed to a successful regatta. A huge thank you to Gavin Gilmer of Tracker for the generous sponsorship, which saw each competitor taking home a prize for their efforts.

Now, I suppose I have to tell who won the trophy – can’t stall any longer!

All I can say is the East better shine that trophy well and take lots of photo’s because next year the West is gonna win! 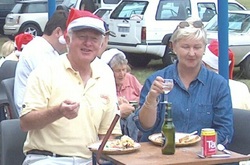 Sheldon was the perfect modeler from the 20th Century. He was a collector of Dinky toys, soldiers, model trains, scale/model boats and model planes. He flew Radio Controlled Gliders and for many years found time to sail Radio Controlled Yachts.

Sheldon was a wealth of information and was always the center of the news chain.

He served on the committee of the Durban Model Boat Club for many years as well as the Radio Sailing KZN Committee for several years.

Sheldon enjoyed his radio sailing and was one of those skippers who sailed for the fun of it. He would rather get out the way than have a yachting incident. His activities in Radio Sailing became less and less over the past few years but his sailing friends kept in contact.

Until three weeks prior to his passing away Sheldon was actively involved with a few members of the Scale Section of the DRBC building a r/c Minesweeper having purchased components from the UK.

He will be missed by all and we offer our condolences to Pam, Michael and Andrew.

Results of the 2011 RSKZN IOM Provincials.

A Tribute to George Griffiths.

Why do we sing the praises of a friend after he has left us and not while he is with us to hear them?

George became a member of  the Northvaal Radio Sailing Club in 1992  shortly after retiring from the position of Managing Director of Frys Metals of S.A. He served as the club Representative to the Northvaal Region of South African Sailing from 2003 for some years he was also the Secretary to South African Radio Sailing Association from 1998 to 2000. and was our club secretary from 2003 until now. He very seldom missed an event and was a quiet and gentlemanly sailor. George was also a long standing member of Germiston Rotary Club where he served two terms as club president and held other key portfolios.

George was married to Audrey for 56 years and would have been 84 in September.

He leaves a son Peter in S.A. and a son Donald and a daughter Helen living in America.

What a wonderful world this would be if we could all be like George. He was always calm and undisturbed in any circumstance, was always the gentleman, never was heard to utter a word in anger or a harsh word to anyone, and was the first person I could go to for advice in club matters and the like.

I am sure a lot more could be said

Our sympathy goes to Audrey and the family
Roy

On behalf of all the members of

Well done to everyone!

Results for the 2011 Keith Mackey Trophy:

INTERNATIONAL ONE METRE, INTERNATIONAL MARBLEHEAD AND 36”SHIPMATE CLASSES
12 to 18 September 2010
The event was held on Gariep Dam some 40km From Colesburg at the Freestate Sailing Club facilities and hosted by the Freestate Radio Sailing Club. Registration and Regatta Measurement of all classes commenced from  Saturday 12 September and continued with RM and IOM measurement of any boats which were available.

36” Shipmate Championship.
There were 21 Entries with Skippers from Gauteng, Western Cape, RSKZN, Port Elizabeth, Mossel Bay and The Garden Route and the Freestate. Boats were divided into two fleets with promotion and relegation of four boats taking place after each heat. Each Race consisting of an “A” and a “B”  fleet heat.  On Sunday the 12th the first heat began in light winds but was abandoned after a short while as the wind died to nothing.   After some time the heat was re-started when a light breeze filled in from the north west. By midday the wind was gusting strongly and most boats were down to their second suits providing good competitive sailing.

Monday  started in the same way except the wind came through in time for the scheduled 10h00 start.  As for the first day competition at the top was very close and several duals were going on lower down the fleet. The 2010 36” Shipmate S.A. Championship came to an end after 12 closely contested races.

Tuesday morning was a rush as those late arrivals had to register and have their boats through event measurement before 10h00. This class has the least number of boats in S.A. and there were 14 enthusiastic entries. The wind was very light to begin, all boats being on their top suits. However by midday the wind strength increased and became extremely gusty with speeds changing from 6knots to 20knots in the space of a few seconds. This made it extremely difficult to select the correct rig although most skippers opted for the smallest rig and hoped for a higher majority of gusts.

Wednesday began with good north westerly winds strengthening during the day and the Marbleheads were being pressed on their smaller rigs. 29 Races were sailed over the two days.

The IOM start was scheduled for 10h00 on Thursday. There were 29 entries and two fleets were sailed using HMS 2006 as in the 36”shipmate Class. The wind again was light to start but by midday was blowing strongly and veering all the time making course laying very difficult.

Friday and Saturday was very much the same with much time consumed in resetting the course to match the wind changes. Sailing was very close with several different skippers winning races.

Unfortunately one heat had to be re sailed as so many boats crossed the finishing line together it was impossible to record their finishing positions.

Sailing stopped at 12h30 after 18 races of two heats each sailed over the three days to enable the Bill Reynolds Inter Provincial to be sailed at 13h00.

The Bill ReynoldsTrophy race is an event held annually in which two skippers from each region compete in six races on the trot. This Year we Included two skippers as an international team. The two skippers were Simon Clarke and Gino Pozzobon who are South Africans at present living abroad and had specifically returned home to compete in the nationals. The Western Cape team pulled off a very good win from the International team.

A big thanks must go to the organisers particularly Cobus de Beer who put in an exceptional effort to make this event the success that it was.